No one Speaks or Writes about him 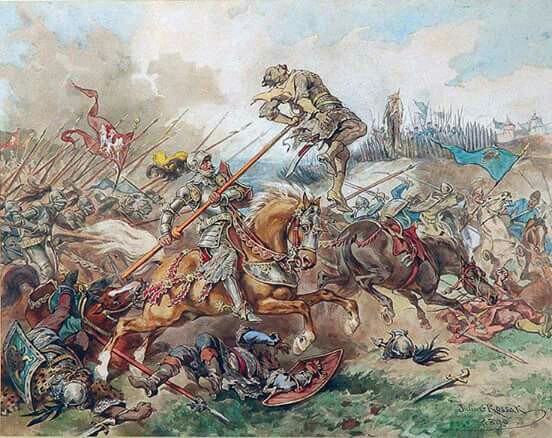 Every Indian historian knows about Price Stephen III of Moldavia, but no one speaks or writes about him.

Stephen III, who ruled Moldavia from 1457 until his death and is known as “Stephen the Great and Holy”. If you’re into that sort of thing, he is said to have fought dozens of battles against all comers during his reign, and only lost two of them. He defended tiny, outsized, outmanned Moldavia against every surrounding power that tried to quash its autonomy or threaten its prosperity: Hungary, Poland, the Mongols, and, most especially, the Ottomans. Stephen was among the first European rulers to take on and defeat the mighty Islamic power of Ottomans after the fall of Constantinople.

The Battle of Vaslui, fought on January 10, 1475, was one of Stephen’s greatest victories and, as one can say, one of the first times after Constantinople that a European Prince managed to run off an Ottoman invasion. The immediate cause was a dispute over neighboring Wallachia, Ottoman Sultan Mehmed the Conqueror thought Wallachia was in good hands under his fuedal, Radu the Handsome (Dracula’s brother, and Stephen’s cousin) and then Basarab Laiotă the Old, and Stephen disagreed. Really, the fight was over the Black Sea coastal region of Bessarabia, and specifically the fortresses of Chilia (modern Kiliya, in Ukraine)–which was at one time Wallachian, then Moldavian, then Hungarian (Transylvanian, technically), then Wallachian again–and Akkerman (modern Bilhorod-Dnistrovskyi, also in Ukraine). Stephen at one point allied with the Ottomans to get Bessarabia back from Wallachia, then turned on the Ottomans when Wallachia became their vassal and Bessarabia thus came under their control. I get a headache trying to persue this stuff.

The region was important, obviously, or else it wouldn’t have been so highly prized. For one thing, there was its commercial value, sitting as it did along the Black Sea coast–Chilia was especially important, because it controlled the point where the Danube River empties into the sea. Strategically, Ottoman control of Bessarabia opened all of Moldavia to their armies, and Moldavia in turn was an ideal staging point for an invasion of Hungary, Poland for the Ottoman Empire. For both offensive and defensive reasons, then, Mehmed wanted Moldavia or at least wanted Bessarabia, so that he always had the option of easily invading Moldavia. We can sum it something similar to Doklam in present day. It can set a stage for further expansion.

Stephen kept trying to put his own candidate in charge of Wallachia. He had an on again, off again alliance with Dracula, or Vlad the Impaler if you like. Dracula had helped Stephen win the Moldavian throne, but they then fell out, over control of Chilia (surprise). But Radu, who converted to Islam and went over to the Ottomans in exchange for their help in toppling Vlad, was unambiguously Stephen’s enemy. Stephen put Basarab Laiotă on the Wallachian throne in Radu’s place twice, in 1473 and again in 1474, but after the second time Laiotă stabbed Stephen in the back and pledged his loyalty to Mehmed. So Stephen invaded Wallachia again in October 1474 and forced Laiotă to flee. Mehmed demanded that Stephen knock it off with the repeated invasions, whereupon Stephen told Mehmed, politely I’m sure, to go suck an egg. So, Mehmed ordered one of his generals, Hadım Suleiman Pasha, who was busy besieging the city of Shkodër (in modern Albania), to complete that siege post haste and then march his men into Moldavia to deal with Stephen. This was a serious mistake; Suleiman Pasha’s men had already been in the field for months, and now they had to make a winter march all the way across the Balkans on this new mission. They would be in no condition to fight once they arrived.

The Ottomans largely outnumbered the Moldavians. Stephen probably had around 30,000 men, but as many as 3/4 of them were poorly armed, poorly trained peasant conscripts. Suleiman Pasha probably had over 110,000 men at his command, but some portion of this was also conscripts, picked up along the way from Shkodër, as well as some 17,000 or so Wallachians, who as we’ll see turned out to be less than reliable. Stephen elected to tax the already struggling Ottoman forces by retreating north and carrying out a scorched earth campaign behind him, forcing them to march even further, without much ability to resupply themselves, before meeting the Moldavian army outside Vaslui, in an area Stephen knew well but Suleiman didn’t know at all.

This was biggest Ottoman mistake. The battlefield Stephen chose was a valley, and on the heights and in the forests around it he stationed archers and artillery to strike the Islamic forces from multiple angles. He used his infantry and light cavalry to lure Suleiman’s men into the trap. When Suleiman committed reserves into the valley in an attempt to relieve the men who were being pounded by all that cannon and arrow fire, Stephen ordered an all-out attack from three sides on the confused muslim force. The invaders broke and ran, and Stephen’s army spent the next couple of days slaughtering them. Somewhat hilariously, only a few returned to Ottoman.

Stephen, who had asked other Christian kingdoms for aid before the battle and was given nothing more than a handful of Polish and Hungarian fighters, now sent another appeal for aid along with some of his Ottoman prisoners to Poland, Hungary, and Rome. Owing to his great victory at Vaslui, this time Stephen’s appeal was met with…pretty much nothing, just like before. Mehmed was furious, as you might imagine, and made vengeance on Stephen his top priority. After Stephen drove off a raid into Moldavia by the Ottomans’ Crimean Tatar vassals, Mehmed sent a 1,50,000 man army north in 1476 that ultimately defeated Stephen (albeit at considerable cost) at the Battle of Valea Albă in July. However, the Ottomans weren’t able to capitalize on their victory, as a combination of disease, Stephen’s harassment, and the arrival of a new army raised by Dracula (who was still contesting rule of Wallachia with Laiotă) forced them to retreat (Vlad then briefly put himself back on the throne of Wallachia, before the Ottomans killed him in December 1476). The Ottomans eventually did capture Chilia and Akkerman in 1484, but Moldavia proper remained out of their hands.

Our Modern day historians of India have studied in much more detailed about all these happenings of Europe, but they carefully avoid mentioning Prince Stephen III. How can they tell us that 1,10,000 mighty Islamic turks were slaughers by some 25-30 thousand semi trained army of an Kingdom Moldavia which hardly anyone has ever heard???

A Refugee in my own country since 1990. A Kashmiri Pandit by birth. Hard Core Nationalist and that is my Biggest Crime.